Marc-Vivien Foe: Remembering the Lion 14 years after he collapsed and died on the pitch

Home » Marc-Vivien Foe: Remembering the Lion 14 years after he collapsed and died on the pitch 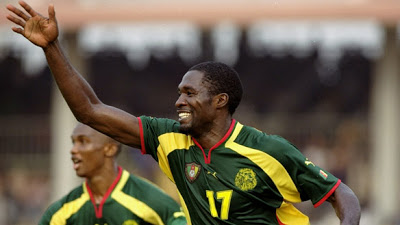 Today 26 June 2017 marks the 14th anniversary of the dead of former indomitable lion’s midfielder Marc-Vivien Foe.  Foe died on the 26 of June 2003, during Cameroon’s FIFA Confederation cup semi final game against Colombia. It was the brutal abruptness of Marc-Vivien Foe’s fatal collapse that made it so shocking. 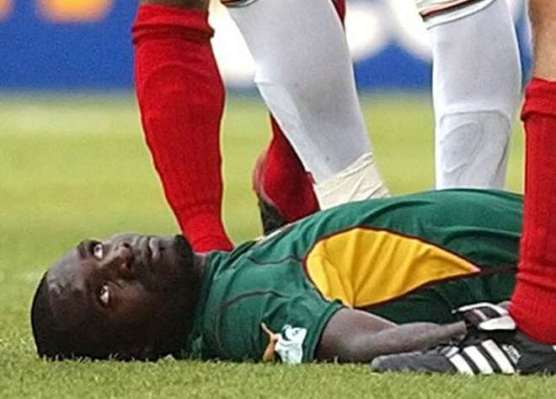 In the 73rd minute of the Confederations Cup semi-final between Cameroon and Colombia at Lyon’s Stade de Gerland, the powerful midfielder, Mark Vivan Foe collapsed at the center of the pitch, the place where his talents were best displayed.

No-one was close to him and nothing seemed wrong, yet suddenly he collapsed to the ground in the centre circle. Medical and support staff attempted to resuscitate the player on the pitch, before carrying him on a stretcher to the bowels of the stadium, where attempts to restart his heart failed and the man known affectionately by his team-mates as ‘Marco’ was pronounced dead. 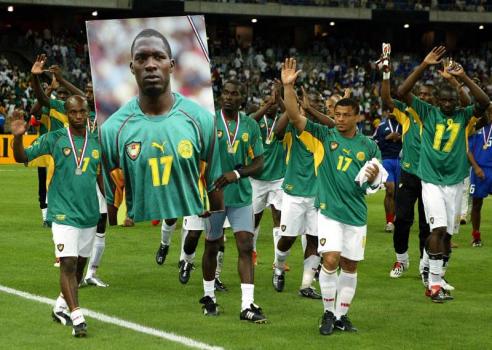 That was 14 years ago, on 26 June 2003, but the memories are still painfully fresh for many Cameroonians, especially with the nation’s participation in the 2017 FIFA confederations Cup, a tournament which claimed the life of their compatriot 14 years ago.

Cameroon’s manager at the time, Winfried Schafer told the BBC that neither he nor his players had realised the seriousness of Foe’s situation at first.

“We won the match 1-0 and the players were dancing in the changing rooms afterwards,” he told BBC World Service’s Sportsworld programme. “Then [captain] Rigobert Song came in and cried and said “Marco, Marco” and told us he was dead.

“Everyone was shocked and was asking why. All the players were crying. I went out of the dressing room and heard two ladies crying very, very loudly. Then I saw Marco lying there, on a table, with his mother and wife by his side. I touched his leg and I went outside and cried too” He added.

A first autopsy failed to establish the cause of the 28-year-old’s death, but a second found he been suffering from a condition called hypertrophic cardiomyopathy (a genetic condition caused by a change or mutation in one or more genes and is passed on through families).

The big question everyone asked was how could a fit, athletic footballer with no known history of heart problems have died in such a way?

Sanjay Sharma, Professor of Cardiology at St George’s, University of London, who has worked with both Manchester City and Team GB at the 2012 Olympics, told the BBC that the first sign of the condition is often death.

“People with the condition, which is characterised by abnormal thickening of the heart muscle, are about three to five times more likely to suffer a cardiac arrest if exercising vigorously than leading a sedentary lifestyle,” he said.

“Sadly, 80% of sportsmen who die from this condition have no prior warning signals and sudden death is the first presentation,” added Sanjay.

After consultation with Foe’s widow, Marie-Louise, as well as his parents, Fifa decided that the Confederations Cup final between France and Cameroon should go ahead as planned. Many of France’s players, including striker Thierry Henry, were in tears as they lined up before the game.

A picture of Foe was shown on the big screen ahead of the game and Cameroon’s players held a huge photo of him during the trophy presentation to eventual winners France. 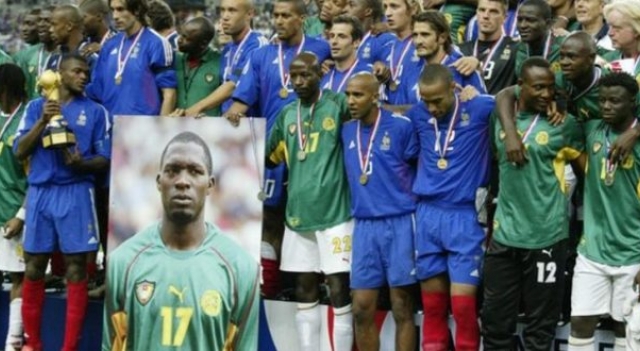 The midfielder was given a state funeral in Cameroon in July 2003. The funeral was huge and had in attendance the president of the Republic Paul Biya, FIFA president at the time Sepp Blatter, and everyone who was anyone in African football. 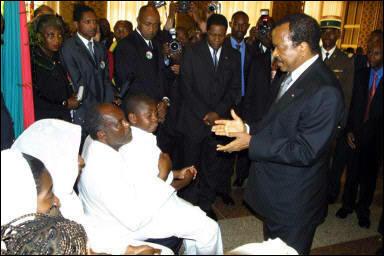 Foe left behind a wife and sons aged six and three, as well as a daughter of only two months old at the time of his death. The player’s generosity had been legendary, and there were reports that he hadn’t much money left behind.

Foe was buried on the site of the football academy he had been having built in his hometown of Yaounde. He used to send a proportion of his wages home to his father Martin each month to fund the construction of the complex, which sadly has practically been abandoned now because of lack of funding. 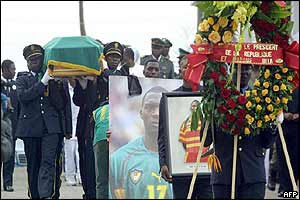 Cameroon’s Indomitable Lions have also been in decline following the death of their star midfielder. Going into the 2003 Confederations Cup they were the undoubted kings of the African continent, having won the previous two African Cup of Nations tournaments, in 2000 and 2002.

Since then, Cameroon football has been going down the drain and they have only won one Nations Cup (2017 AFCON).

Foe had been on loan at Manchester City from Lyon in the 2002-03 season, making 35 appearances and scoring nine goals. City retired his number 23 shirt after his death, while a street was named after him in Lyon.

With more than a decade gone, football will continue to remember a fine player who grew up in poverty in Africa, and went on to play in some of the biggest leagues in Europe.