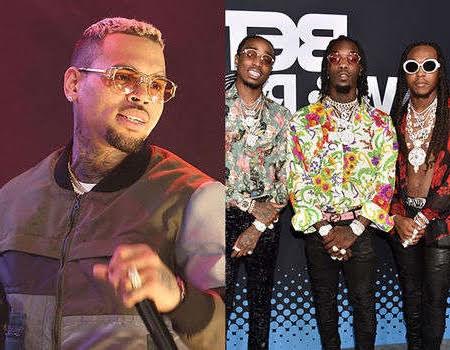 Ever since Quavo of hip-hop trio Migos started dating Chris Brown ex-girlfriend, Karrueche Tran, the pair sees themselves as hot-blooded enemies who never walk in the same direction.

At the BET after -party Migos and Chris Brown’s crews got into a fight after the R&B singer finished premiering his new music video with Future at the event near Microsoft Theater in downtown L.A.

Witnesses said someone in Chris’ crew threw the first punch at someone in Migos’ entourage, which squared up the heated fight between the two camps.

In the video obtained by TMZ, Chris Brown could be seen being held back by friends in other to restrain him from getting involved before he was led out of the scene by his bodyguard.

Rapper Future and DJ Khaled were also spotted at the scene. At some point, Khaled’s fiancée who was standing nearby with their son, Asahd, was heard screaming Khaled’s name as he tried to get involved in the brawl.

Watch the video below…