After 1 year; Meme Lawyers and Fako Lawyers call off strike! 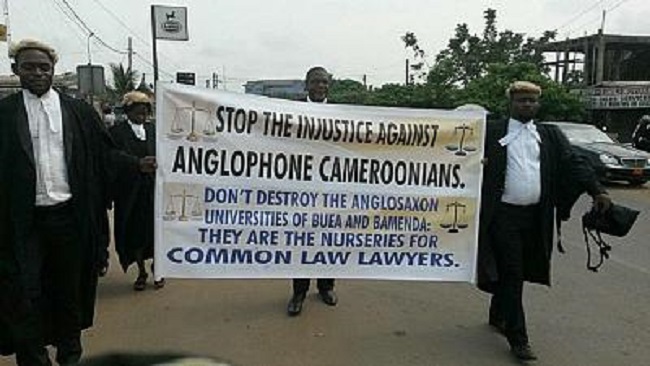 The Vice President Barrister Mpako Jacob of the Meme Lawyer‘s Association with about 20 other lawyers agreed to call off the sit-in strike of the Anglophone lawyers which started on the 6th of October 2016.
This was done in the absence of their president; Eyambe Elias, who went on exile for fear of being arrested. This was proceeded by a resumption of activities at the Meme High Court, one year after the Anglophone Lawyers strike.
Meanwhile not all lawyers are in support of this decision to call off the strike. Yesterday, there was a standoff in Kumba as lawyers against the Call Over stormed the street in protest, calling on the sit in strike to continue.
The Vice Secretary General of the Meme Lawyers Association says he and dozens of his colleagues are not going to court. They say all the Associations(in all the English speaking regions of the country) must take a unanimous decision.
Meanwhile, lawyers of the Fako Lawyers association also announced suspension of the strike and promised to resume work on Monday.
It is worthy to note that Meme Lawyers and Fako Lawyers are not the only lawyers in the English speaking regions of Cameroon. The Lawyers of the other associations have not called off the strike.