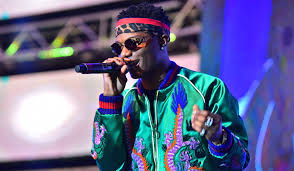 Sunday October 15 was a remarkable day in the history of Nigerian music as it set to celebrate a legendary nigerian music artist,multi-instrumentalist, musician, composer and pioneer of the Afrobeat music genre “Fela Kuti”   who has inspired so many Nigerian artists including Wizkid. The event called “Felabration” was a huge success as many artists were invited and who performed on stage.

Putting up an impressive performance at Felabration , StarBoy Records Boss Wizkid also put a smile on the face of a cripple fan.During the performance of one of his hit song “pullover” with Kcee, the singer spotted a crippled fan and called him to the stage where he danced so joyously to his song.Being pleased with the enthusiasm and joy with which this fan enjoyed his music despite his inabilities, Wizkid brought out a bunch of Naira notes from his pocket and gave to the fan. It did not end there as the singer stopped the music and announced that after the show, the fan should come home with him as he has more to give him.Watch video below;