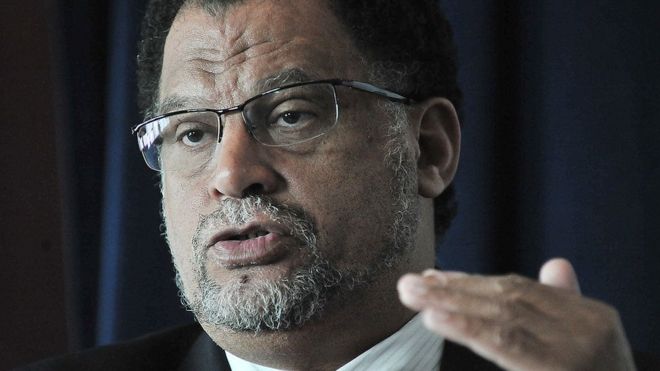 He “overpowered” her and “painfully” raped her in a hotel in Port Elizabeth city, she has alleged in a blog.

Mr Jordaan, who organised the 2010 World Cup in South Africa, has not yet responded to a request for comment.

Now living in Sweden, Ms Ferguson said she had been moved by the #MeToo campaign on social media to speak out.

She said the attack took place when she was “high and happy” following her unexpected nomination by Nelson Mandela’s African National Congress (ANC) party to serve in South Africa’s first democratically elected parliament in 1994.

Mr Jordaan, a prominent member of the ANC and president of the South African Football Association, came to her hotel suite after she had given a performance at a dinner.

“He overpowered me and painfully raped me. It must have been over in about 20 seconds although it felt like a lifetime,” she alleged.

“He left immediately without saying a word.

Ms Ferguson said she had been “bewildered” and in a state of “complete shock”.

“Not sure what to do, I washed and left the hotel and began to walk. I reached the beach and sat there a very long time trying to process what had happened,” she said.

“The thought of going to the police felt intolerable. What would I say? Should I have screamed louder? Fought him off harder? Had I been complicit in some way? All these questions raged in my mind. I wept.”

She accused the football boss of using her as “an object for his sad need for power and twisted gratification”.

“I am not speaking out to get revenge on Danny Jordaan or a million South African men like him. I am doing this so we can help each other be courageous, speak out and begin to heal as we find we are not alone,” she added.

Mr Jordaan was widely praised for spearheading South Africa’s 2010 football World Cup bid. It was the first time that the tournament was played in Africa.

In 2015, the US Federal Bureau of Investigation (FBI) alleged that South Africa had paid a $10m (£6.5m) bribe to host the tournament. Mr Jordaan and the government strongly denied the allegation.

Mr Jordaan was mayor of Nelson Mandela Bay, which includes Port Elizabeth, until 2016, when the opposition took control of it in elections.