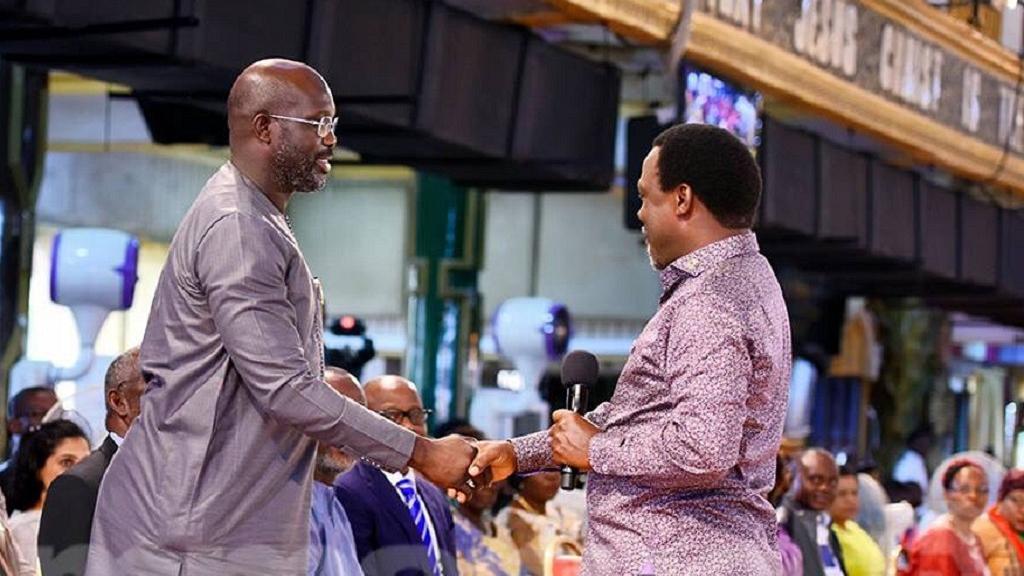 Former world footballer of the year and Liberian presidential hopeful, George Weah, was in Nigeria over the weekend on a spiritual mission, Africa news reports.

Weah, 51, who faces a second round vote in his third straight bid to enter the presidency, met with popular Nigerian televangelist, TB Joshua at the Synagogue Church of All Nations (SCOAN) in Lagos.

Photos showed TB Joshua in a handshake with Weah, who was accompanied by some top associates.

TB Joshua’s official Twitter account also confirmed Weah’s presence at the (SCOAN) in a tweet which read “Senator George Weah, the footballing legend & leading presidential candidate in Liberia is at The SCOAN to seek God’s face about his nation.”

Senator George Weah, the footballing legend & leading presidential candidate in Liberia is at The SCOAN to seek God’s face about his nation.

Unlike in the case of the United States election in November last year when the evangelist tipped former First Lady, Hillary Clinton, for victory; he did not make an explicit statement on the outcome of the November 7 run-off.

Weah is hoping to win Sirleaf’s seat after losing Liberia’s first post civil war elections to her in a run-off in 2005. In 2011, he was a vice-presidential aspirant to Winston Tubman, but Sirleaf managed to secure a second straight term.
photo credit: Africa news