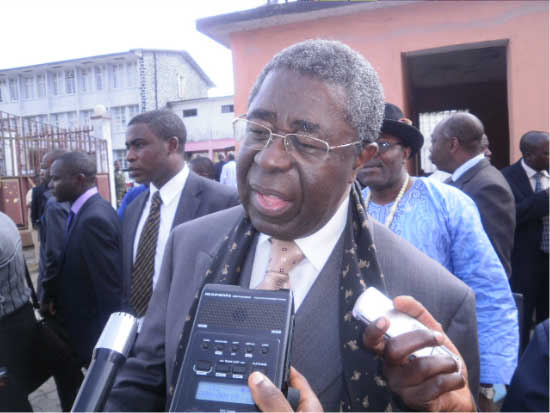 The South West Regional team led by former Prime Minister Peter Mafany Musonge, sent on a dialogue mission have finalised their mission and it’s been taken to Yaounde.

The report was taken to Yaounde by former Prime Minister Peter Mafany Musonge and head of mission to appease the South West population, following uprisings across Anglophone regions.

Prior to his departure for Yaounde, the former PM met with his delegates on Sunday, October 22, 2017 at the South West Governor’s office to compare notes.

The three-hour meeting also marked the end of field work of various delegations to the six Administrative Divisions.

As expected, the various Divisional delegations tendered their reports which were all assembled for onward transmission to Yaounde through Peter Mafany Musonge.

The head of mission expressed optimism to the press after his final meeting and assure the public that long-term solutions would be sought to address the problems raised by the population. He also added that the Head of State is very attentive to what will come from the field.

South West Region as head of mission to consult the grassroots for one full week within the framework of bringing back peace. What results have you obtained?

First of all let me say this, we came to execute a mission ordered by the Head of State through the Head of Government for a mission of appeasement and to give hope to the various populations. I must say that we were very warmly received. The teams we sent out to the various Divisions were very well received. We let the people speak and they spoke and we noted their grievances. They explained their problems and we were able also to talk to them and in the end we encouraged them to send their children back to school and to stop the ghost town operations which were impoverishing them. We asked them to stay in peace. This is because for development to come they need to be in peace. There were some difficult areas as reported by the social and mass media including Lebialem and Manyu Divisions.

What special message have you from these places?

We know the problems of Lebialem. The Head of State knows the problems of Lebialem. And it is a matter of time before these matters are addressed. I know that they have a problem of roads. The main road being from Dschang to Menji and down to Bakebe. Road studies are on. You know it takes some time before the money is acquired because we are talking of CFA Billions. So, let them be patient. The road will come. I have been to Lebialem twice before. We helped bring electricity to the place. We were ordered by the President of the Republic to do so. They just need a bit of patience, it will come.

They are hardworking people. After such consultations on the ground what should be expected next?

It is that many of these problems will certainly be addressed. Those that require immediate term action will be addressed and those requiring medium term actions will also be addressed. The people have clearly expressed their minds. Many people were wishing that the Head of State could speak to Anglophones. What is your opinion? People always like to hear the voice of their father. He has returned. Let us wait and see what he does. Let us turn our backs to violence and regain the path to peace and see how problems will be looked into by the President of the Republic.

The best Fifa football awards 2017: Who won what?