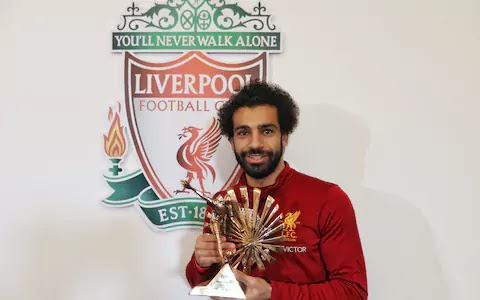 Egyptian footballer Mohamed Salah has been voted BBC African Footballer of the Year for 2017.

Shortly after receiving the award, Salah posted pictures on twitter with the caption;

“Very proud to have won this prestigious award for best African player, and joining the ranks of many great players who won it before me”.

Very proud to have won this prestigious award for best African player, and joining the ranks of many great players who won it before me. pic.twitter.com/jgqrCHcLWl

Salah, the Premier League’s top scorer with 13 goals, has enjoyed a stellar year for both club and country.

In early 2017, the forward was the central figure for Egypt as they finished runners-up at the Africa Cup of Nations.

He also had a hand in all seven of the goals that took the Pharaohs to their first World Cup since 1990, assisting two and scoring five, including the stoppage-time penalty against Congo that qualified them for Russia.

In Italy, he scored 15 goals and made 11 others as he helped Roma finish second in Serie A, their best league placing in seven years, prior to joining Liverpool and scoring 13 times in his first 16 league games.

Salah has taken the Premier League by storm this season, in contrast to a less impressive spell in the division with Chelsea between 2014-15.

By winning the BBC African Footballer of the year prize Salah adds his name to a list of legends including Jay-Jay Okocha (Nigeria), Didier Drogba (Ivory Coast) and Michael Essien (Ghana).