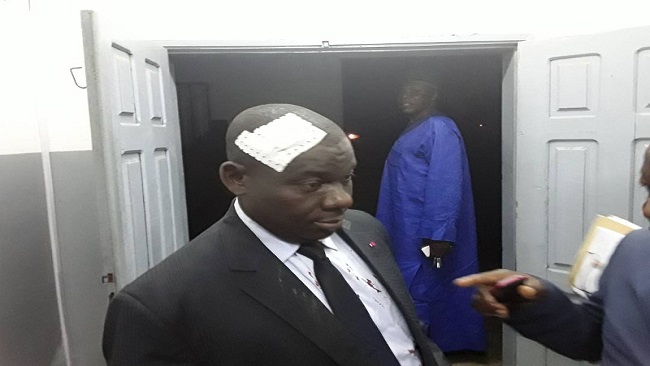 A video we posted earlier showed the Honorable Richard Wallang bleeding profusely from the head after receiving a projectile.

How then is the latter, who apparently was injured in the head, now left with an operated hand?

A source from Cameroon-Info.Net, another member of parliament reveals the answer.

“Just as Tomaino Ndam NJOYA was swinging ‘weapon'[object she flung over in anger] on all the Deputies on the day of the budget vote, WALLANG dodging the projectile placed his right hand on his face, which is why all the colleagues believed he He was injured only at the level of his head, and he was seriously injured in the palm of his defensive hand. Urged urgently to the infirmary of the National Assembly the same day, the doctors sewed the two places where blood gushed without knowing that the debris of the object were not only buried on his head but also on the injured hand. After several days of bandages in both places, our colleague was complaining about his hand, which hurt very badly every time we met. So yesterday, unable to bear the pain, we evacuated it urgently to the emergency room of the Central Hospital. This is where we thank the surgeon and his collaborators who insisted on the operation of this malignant hand last night. And to our surprise the debris was trying to bring our colleague in a very critical situation. The operation went well but the surgeon demanded that our colleague remain at his disposal at least 10 days as we told the Hon DISSAKE last night.”