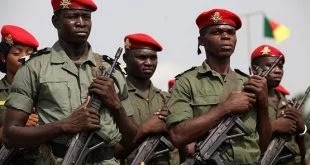 Chief Warrant Officer Alim Jean, commander of the Bali Community Research Brigade, and Constable Cadet Alkiambong were killed Sunday in an attack on alleged separatists in the English-speaking North West.
 
According to information relayed by British radio the BBC, which quotes security sources, they were beheaded. The remains of the bodies were taken to the morgue of the Bamenda hospital.
The North West and South West regions are regularly the scene of violence between law enforcement and separatist militants calling for the independence of the English-speaking regions.
Last Friday, a 42-year-old female teacher was fatally injured by unidentified gunmen who attacked her school in Muyuka, in the Southwest region.
She died at the hospital where she was transported after the attack on her school by armed men riding a motorcycle, according to national radio, CRTV.
This violent death comes three days after the death of a teacher who was shot in similar circumstances in Kumba, in the same area. The Kumba attack also caused injuries to a student.
For about three months, armed separatist groups in the north-west and south-west regions have been multiplying violent actions against state symbols (gendarmerie attacks, kidnappings of civil servants, clashes with the army).
As the crisis evolves, new separatist groups appear, sporting on the social networks weapons and flag of “Ambazonia”, the name of the state they want to create.
According to the economist; Dieudonné Essomba, the Cameroonian state does not have the operational means to destroy these separatist groups. Moreover, he argues, “It was a terrible mistake to believe that we could put an end to this movement by force .”