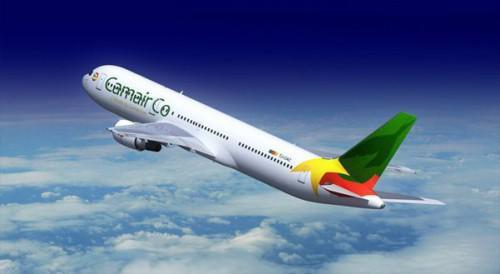 Cameroon Airlines Corporation (Camair-Co) issued a two-way press release announcing two notices for the recruitment of airline pilots and pilot-in-command pilots on Boeing 737 NG, Bombardier Dash-8 Q400 or MA 60.
These announcements, which do not specify the number of personnel to be hired, confirm the option of the national airline to expand its fleet.
At the end of last February, it was reported that Camair-Co had leased from an Abu Dhabi Aviation company, a Bombardier Dash8-Q400 aircraft, with a capacity of 70-78 seater modular seats.
This aircraft is one of the two aircrafts that the Canadian firm must deliver to Cameroon before the end of 2018.
Already in April 2017, Camair-Co’s managing director, Ernest Dikoum, revealed that the country had disbursed 41.1 million US dollars (about 26 billion FCFA) for the acquisition of two Boeing 737-700 NG, previously leased from the American Aviation Capital Group (ACG).
The company’s fleet currently consists of a Boeing 767-300 ER with a configuration of 30 business seats and 180 economy class seats, two Boeing 737-700s with a configuration of 12 business seats and 116 seats in economy class, and two MA60 Chinese-made configuration of 45 seats.
 
In its latest operating report, Camair-Co reported that its performance in 2017 was “above average acceptable rates in the industry” with a total of 235,686 passengers carried last year.
The evolution of the key indicators of the public company, between 2016 and the following year, shows an increase in passenger traffic (+ 94%), cumulative flying hours (+ 27%), turnover ( + 61%), productivity (+ 174%), combined with a temporary operating deficit of -80% as of December 31, 2017.
Camair-Co, which began operations on March 28, 2011, is currently implementing a recovery plan proposed by the US firm Boeing Consulting, after receiving a government grant of CFAF 30 billion representing the first tranche of the plan’s financing.
In 2016, crumbling under a debt estimated at CFAF 35 billion, the Cameroonian company undertook to review its expenses, with the reduction of salaries and benefits of a large part of the employees.