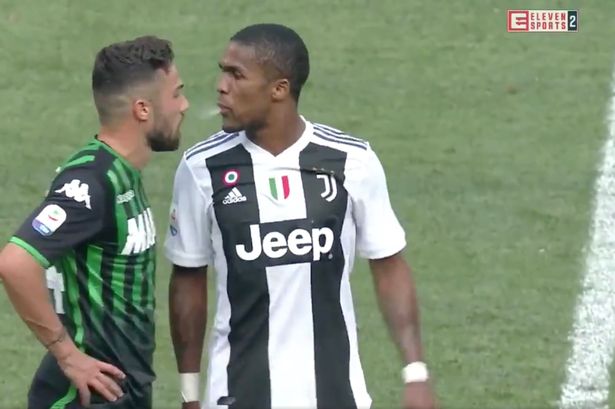 Juventus winger Douglas Costa has been banned for four Serie A games for spitting at Sassuolo’s Federico Di Francesco, during Sunday’s 2-1 win.

Costa was booked in injury time for elbowing and then aiming a headbutt at Di Francesco after a dangerous lunging tackle on the Italian.

The Brazilian, 28, was then sent-off via VAR, after TV replays showed him spitting in the Italian’s face.

He will miss games against Frosinone, Bologna, Napoli and Udinese.

But Costa is eligible to face Valencia in the Champions League on Wednesday (20:00 BST).

The Italian Football Federation decided not to punish Costa any further for violent conduct.

After the game, Costa described his reaction as “ugly” and apologised to his team-mates and the club’s fans on Instagram.

Juventus coach Massimiliano Allegri said Costa’s actions had “damaged” and “shocked” the squad as it was “totally out of his character”.

The Italian added: “He’s apologised, he’ll pay with a four-match ban and he’ll show with fair play on the pitch that this was an isolated incident.”