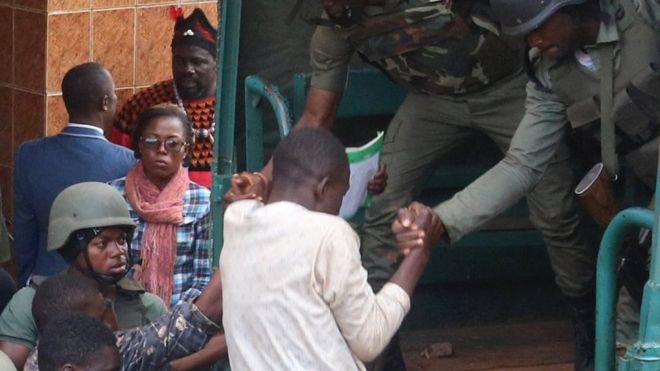 The final four hostages of the 81 people kidnapped from a boarding school in Cameroon have been released.

The principal, one teacher and two students were dropped off on the outskirts of Bafut, a town 15 miles (24 km) from Bamenda, local officials say.

It remains unclear who was behind the kidnapping in Bamenda – the government has blamed Anglophone rebels but they have denied responsibility.

Separatists took up arms in English-speaking parts of Cameroon a year ago.

Bamenda journalist Peter Tah said a family member of one of the hostages, who did not want to be named, confirmed that the four had been released at around 08:00 (07:00 GMT) local time.

The other 76 boys and girls were freed last Wednesday, after being seized from a secondary school run by the Presbyterian Church in Bamenda on Sunday 4 November.

It had initially been reported that all of the students, aged 11-17, had been released but it later emerged that two students were still being held.

“From what I gather, the gunmen tried to find out which of the children had parents who worked for the government,” Tah told the BBC.

“People whose parents worked for the government were held and separated for more questioning. The last two children were held because of their parents’ jobs.”

Cameroon’s English-speaking minority have long accused the government in the mostly French-speaking country of ignoring them.

John Fru Ndi makes a shocking revelation about the involvement of some Ministers in The Struggle for 'Ambazonia!'