Amba Boys reveal why they are attacking priests in Manyu!

Home » Amba Boys reveal why they are attacking priests in Manyu! 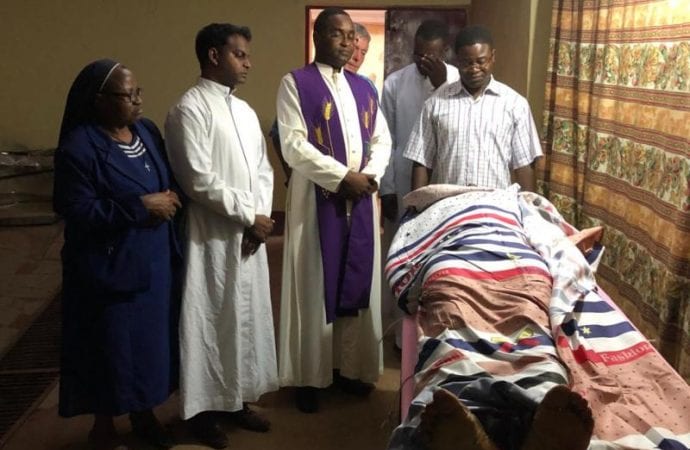 A bishop in Cameroon’s troubled South West Region has called on separatist fighters to stop targeting and harassing local clergy.
Bishop Andrew Nkea of Mamfe made his demands in a Nov. 10 pastoral letter noting that the local rebels – called “Amba Boys” – had been causing trouble for his priests, with one being murdered on Nov. 1.
He said the problem was getting so bad that he was removing priests from the parishes where they face the most risk.
Cameroon’s English-speaking North West and South West regions have been experiencing a civil conflict since 2016, when demonstrations broke out after there were demands to use French – the majority language in Cameroon – in their common law courts and English-modeled schools.
English speakers make up around 20 percent of the country’s population and have long complained about being marginalized by the French-speaking ruling class.
After Cameroon’s security forces’ heavy-handed response – including using live ammunition on demonstrators – rebel movements arose calling for the independence of Anglophone Cameroon, saying the new country would be called Ambazonia.
The separatists have often targeted clergy in kidnapping for ransom schemes to raise funds.
Nkea documented several incidents involving clergy in his diocese.
“In the morning of Oct. 20, 2019, some unknown gunmen who claim to be members of the restoration forces of Ambazonia, abducted Father Felix Sunday, a Nigerian “fidei donum” priest and parish priest of Afap, when he had just celebrated Mass in a mission station and was returning to Afap for the second Mass,” the bishop wrote.
“They kept him overnight and only released him on Monday, Oct. 21, 2019. On that same Sunday, October 20, another group of young men with guns waited on the road between Ewelle and Ajayukndip to abduct the assistant priest of Kembong parish, Father Gabriel Romeo Foukwa, but the Angel of God intervened and Father missed the road and arrived to his parish through a different route. The same fateful day, Oct. 20, there were plans by again another group of armed young men to kidnap the parish priest of Eyumojock, Father Emmanuel Dzesinyuy in Tabor. But the innocent priest celebrated Mass without knowing anything and left before his kidnappers arrived,” he continued.
Most horrifying, the bishop noted that on Nov. 1, Father Cosmas Ondari was murdered in Kembong, with two other clergy being held at gunpoint for ransom.
“Eventually they released them without any ransom paid. What was painful about these abductions is that some of the Christians knew either hours or days beforehand that this would happen and never warned the priests,” Nkea said.
The bishop warned that God would punish those who attacked clergy for their crimes.
“Touching the anointed one of God never goes without guilt and this guilt follows such a person right into the grave. The priest is a man of God and all those who lay hands on such an anointed incur a malediction upon themselves,” Nkea wrote.
He accused the separatist fighters of claiming to be fighting for the liberation of Cameroon’s English-speaking population, but instead inflicting pain on the people and their clergy.
Nkea noted the separatists tried to justify their attacks on clergy as retaliation for the bishop in the Cameroonian government’s “Major National Dialogue’ in Yaoundé who sought a solution to the Anglophone crisis, but was boycotted by rebel groups.
“The young men who have been perpetrating these heinous acts against the priests claim that they are venting their anger against the Bishop of Mamfe because he attended the Grand National Dialogue in Yaounde, and that all those who attended the Dialogue from Manyu must pay a fine of 500.000 CFA francs [around $850] each,” Nkea said, adding that he would never pay the money to anyone.
The bishop also said the activities of the rebels had stalled numerous development projects sponsored by the Church in the the Diocese of Mamfe.
“Of all the parishes of the diocese, there is no one that has not felt the motherly hand of the diocese in its growth, especially through the instrumentality of the young and dynamic priests of the diocese who sacrifice and work through the very difficult terrain of the diocese to ensure that the Gospel reaches all the corners of the diocese,” he wrote.
He cited schools and hospitals as well as various social and development projects carried out by Caritas, the development wing of the Church, as evidence that the Catholic Church has been working to promote the welfare of the people, and said it was morally wrong for separatists to target people working to improve their welfare.
Nkea announced that he would be removing priests from the parishes of Kembong, Ossing and Eyumojock due to the unacceptable risk they face.
“This will hold good for any other parish where the people decide to harass their priests,” the bishop added.
“These boys who harass the priests are from these villages, and until the population dialogues with their children and gives me a written guarantee of the safety of the pastors who work for them, the parishes will remain without pastors,” he said.
Nkea called on the separatist fighters “to change their hearts and work towards the growth and progress of their various communities.”
“They should collaborate with their village and Christian leaders, so that their priests can return soonest to their parishes and continue to work in peace. I appeal equally to those who give them orders to do such acts against the people, to stop from pushing these brothers into calling malediction upon themselves,” he said.
Source: crux.com