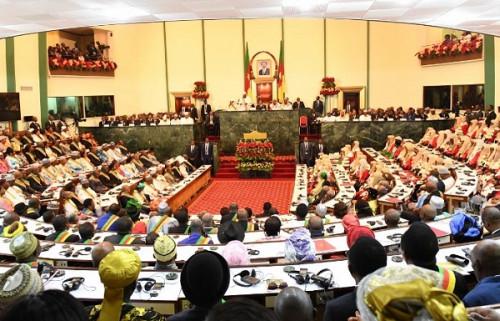 On Tuesday December 11th, the National Assembly finally adopted the controversial law on the promotion and use of English and French as the two official languages in Cameroon.
The bill had been on the table of law makers two weeks ago, but it was suspended for adjustment after Anglophone lawyers and civil society members protested.
It got reintroduced and finally adopted on Tuesday with just slight changes notably on Article 26 (2) which states ‘Courts decisions shall be rendered in any of the official languages, depending on the choice of the litigant and the understanding of all present in court.’
Indeed, “The Republic of Cameroon adopts English and French as official languages ​​of equal value,” stipulates the said law in Article 1 paragraph 3.
This will gradually and surely allow all Cameroonians to become more easily bilingual. Which is an excellent thing for their future, especially their openness to the world, and that of the country in particular for a better cohesion.
To arrive in an administration and to be laughed at because one does not speak English or French is traumatic. This law is therefore fundamental in that, in addition to promoting bilingualism, for its application it has enabled the recruitment of more than 500 interpreters and translators by the government, who will be deployed in all jurisdictions that require their presence.
From a practical point of view, it is a law that establishes equality, because better than before, a user can be served in the language of his choice by the administration. There will be more rigor in improving the promotion of bilingualism in public institutions, the private sector and civil society in the country.
In addition, section 17 of the Act provides that press articles, and other institutional communication documents, must be produced and made available in both official languages.