Atanga Nji reveals that some humanitarian organisations active in the NW and SW are enabling terrorists!

Home » Atanga Nji reveals that some humanitarian organisations active in the NW and SW are enabling terrorists! 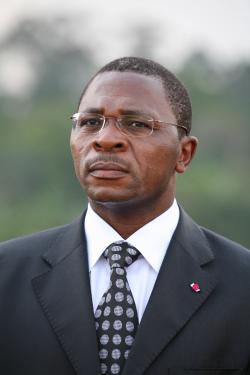 The government is asking international organizations intervening in the context of the crisis in English-speaking regions to exercise transparency.
The message was passed on by the Minister of Territorial Administration, Paul Atanga Nji on Saturday in Yaoundé.
He discussed with the press about the new humanitarian convoy of 100 trucks , dispatched by President Paul Biya to the North West and South West(NW and SW).
He accused humanitarian organizations of taking advantage of the crisis to carry out illegal actions in the area.
“In the southwest, the defense and security forces intercepted an ambulance from a humanitarian agency transporting three dangerous terrorists wanted by the security services, as well as 3 Kalashnikovs and 2 cases of ammunition,” said Atanga Nji, without revealing the name of the organization concerned, the interception zone as well as the date of the facts.
“Not too long ago, the defense and security forces carried out an unexpected check in a humanitarian convoy of a humanitarian partner. In this truck, there was rice, soap, cans, etc. Paradoxically, there were in this truck, 3 cases of ammunition, pairs of binoculars, Android phones, etc. ” , he added, ironically that the internally displaced do not need this material.
“the government now demands more transparency and more responsibility in the operations of our partners in the North West and South West regions” – Atanga Nji said.
The government will always work with humanitarian organizations, said the Minister of Territorial Administration. “We need them,” he said, adding that it is a duty of transparency that is requested.
MINAT also claimed that the figure of 600,000 internally displaced persons put forward by NGOs is false information.
Atanga Nji speaks of 152,000 internally displaced persons from NW and SW, and between 6,000 and 10,000 internally displaced persons for the other regions.