February 11th Youth Day Celebrations in Cameroon originated from West Cameroon. This is how it all began:

Home » February 11th Youth Day Celebrations in Cameroon originated from West Cameroon. This is how it all began:

Did you know that “Youth Day” was an initiative of the West Cameroon government, introduced initially to replace its ‘national day’ which prior to reunification was celebrated every 26 October?
In 1962, less than a year after gaining its independence by joining French Cameroon, John Ngu Foncha, West Cameroon’s Prime Minister at the time, recommended that it was befitting to dedicate West Cameroon’s national day to its youth on whom the future state depended. Since the National Day had become obsolete after Reunification.
It is not clear if this recommendation was debated in the assembly but it was enforced that same year. On 26 October 1962, the first “Youth and Sport” day was organised in West Cameroon. At its inception, West Cameroonian politicians, traditional leaders, civil servants and the public, attributed enormous importance to the youth day. 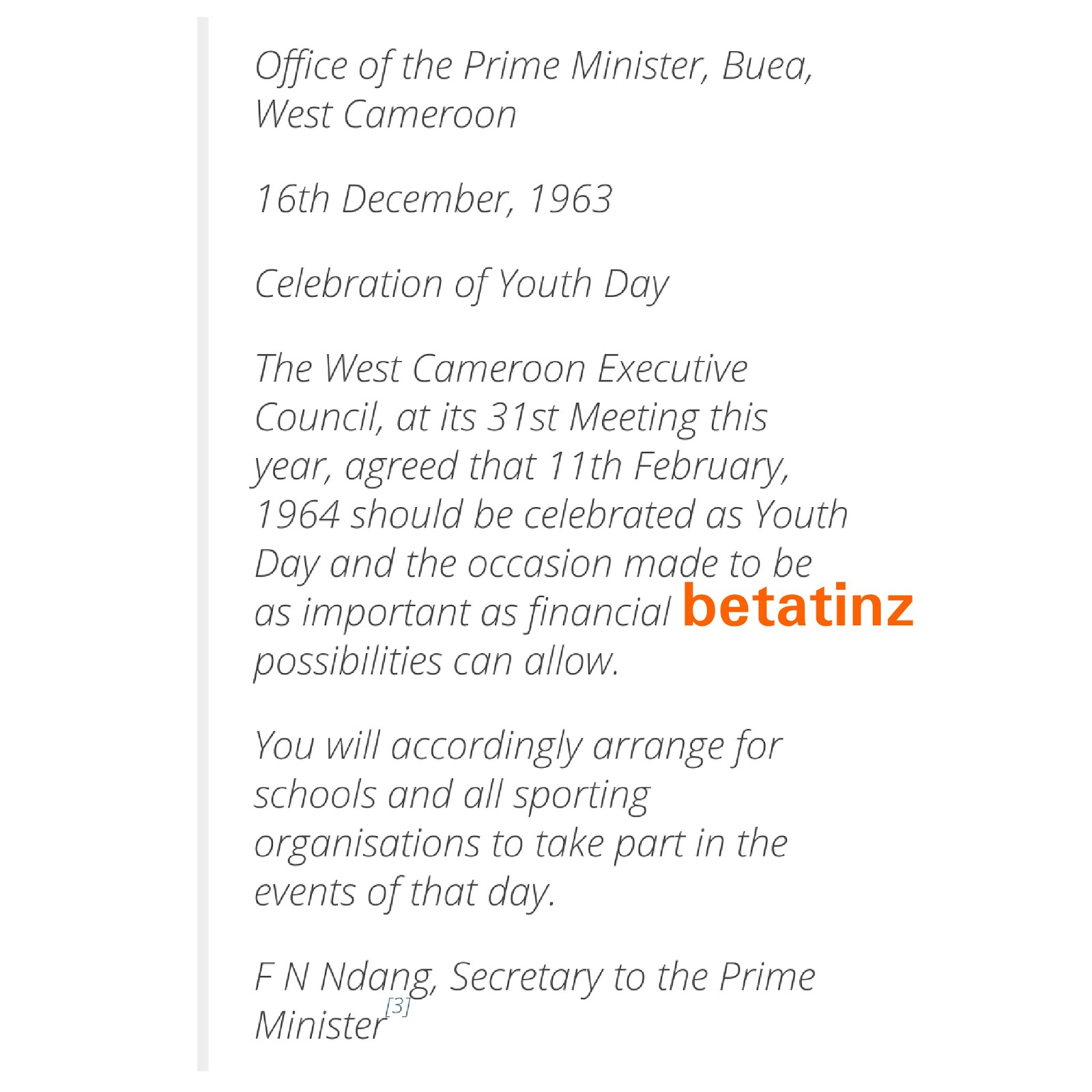 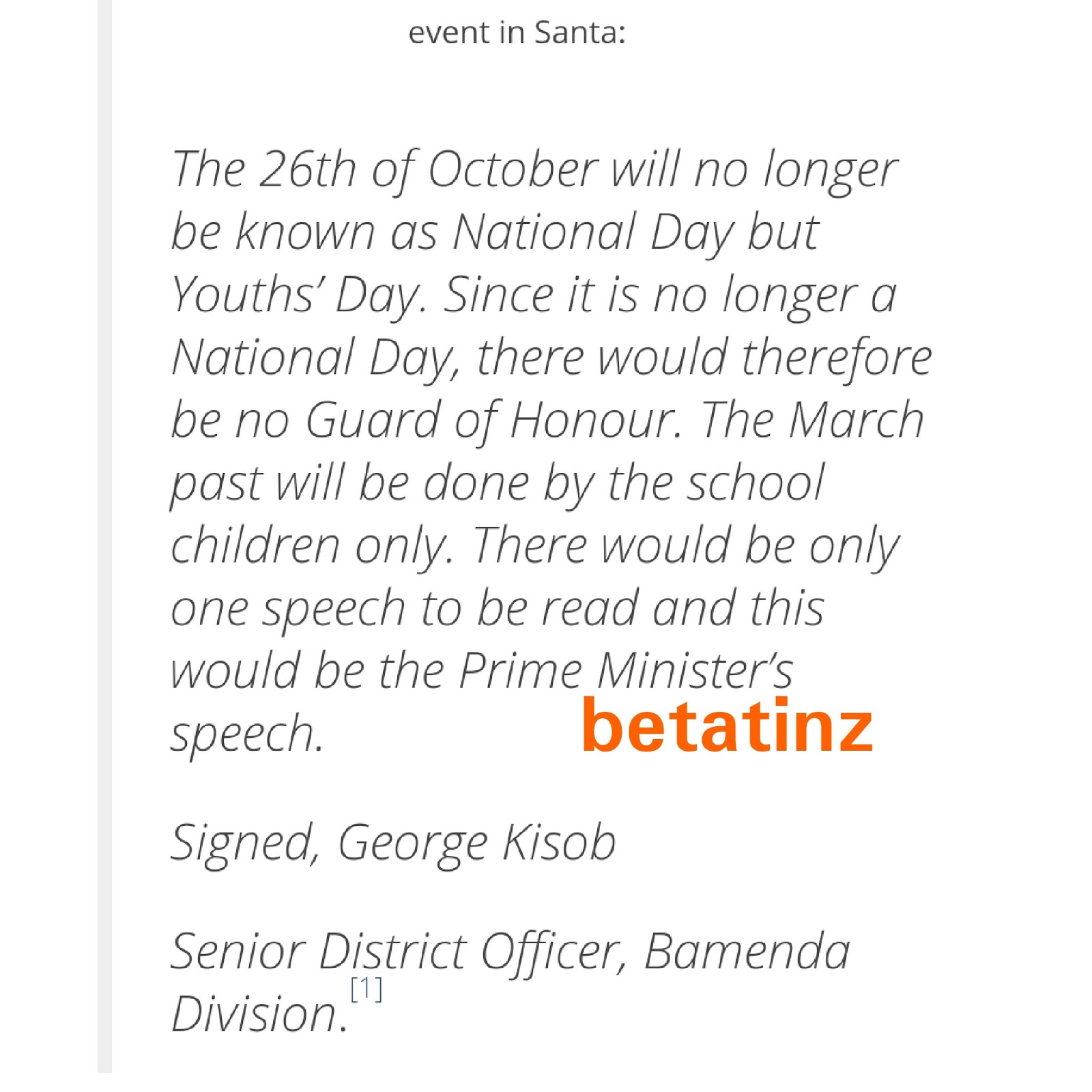 So the Ministry of Education in Southern Cameroon’s sent a letter to all parties concerned, Nation wide, detailing the activities of the Youth Day: The Youth Day was to run from 8:30a.m. to 6p.m. Activities consisted of hoisting the flag, reading of the Prime Minister’s speech, a march past by school children, athletic competitions, folklore dances etc. The day was crowned by the award of prizes to deserving schools and pupils.
The department of Education and Social Welfare which was charged with organising youth day events in collaboration with civil authorities in various divisions reaffirmed ‘the intention of West Cameroon Government to make the Youth Day celebrations of this year [1964] unique, in commemoration of the Plebiscite Day which brought Independence to this state’ and called on all forces ‘to give the occasion the dignity and popularity it deserves.’ 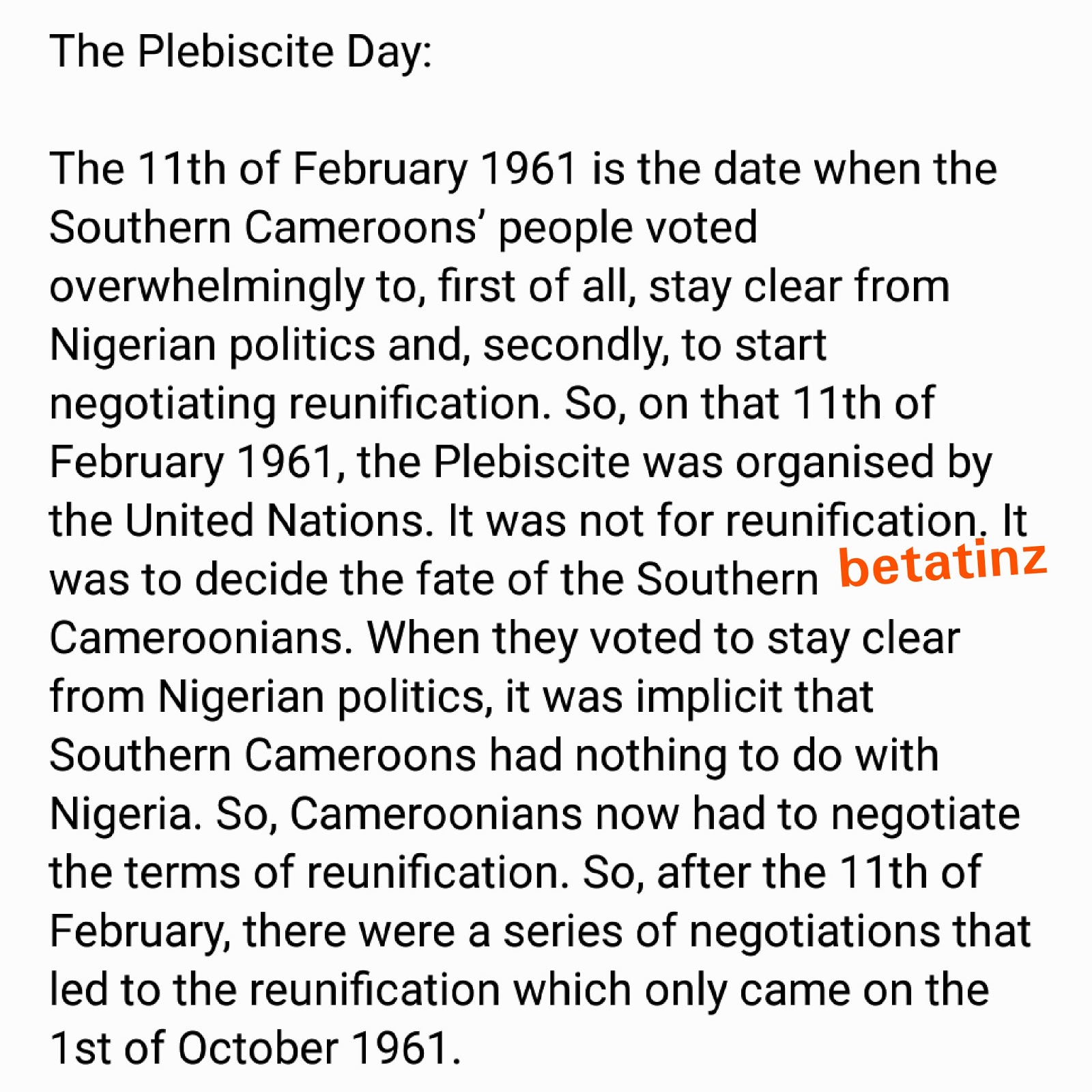 So for the first Youth Day as 11th February, in 1964, the West Cameroon government invited over 200 dignitaries from East (French) Cameroon including the Federal President, Ahmadou Ahidjo, the mayors of Douala, Nkongsamba, Kribi, Yaounde, traditional rulers such as King Manga Bell of Douala and the Sultan of Foumban to Buea and Bamenda. It was a huge success.
By 1966, the Cameroon federal government, which later became the Republic of Cameroon, under Ahidjo, adopted the West Cameroonian event and raised it to a national public holiday, as a symbol of consolidation of National Unity.
From then till today, 11th February is celebrated as Youth Day in Cameroon.
Sources: cameroonpostline.com, judefokwang.com