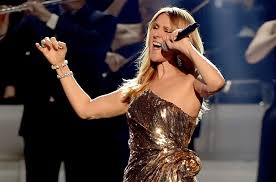 After her husband René
Angélil passed away last year
14th January 2016, Celine Dion decided to stay off the media and the
public while mourning.

Her late manager and husband as
she said during his burial was her strength, her manager, and her confidante life will be so difficult without him.

The music diva has decided to
leave her hiding hole and face the reality of seeing her husband no more as she
announces that she will take us back to the late 90s by performing the greatest
hit of her life time “My
Heart Will Go On “ at
the 2017 Billboard Music Awards scheduled to take place on the 21st of this
month.

The French-Canadian singer will
be celebrating the 20th anniversary of Titanic with a performance of the
Oscar-winning ballad “My
Heart Will Go On.”

This song was written 20 years
ago after the movie Titanic was released. In an interview where she was being
asked about her performance of the song, she expressed her joy and excitement
as she said the song meant a lot to her and she is honored to be able to perform
it at the Billboards award.

She went further to thank the
original writers of the song James Horner and Will Jennings for giving
her the opportunity to be a part of Titanic.