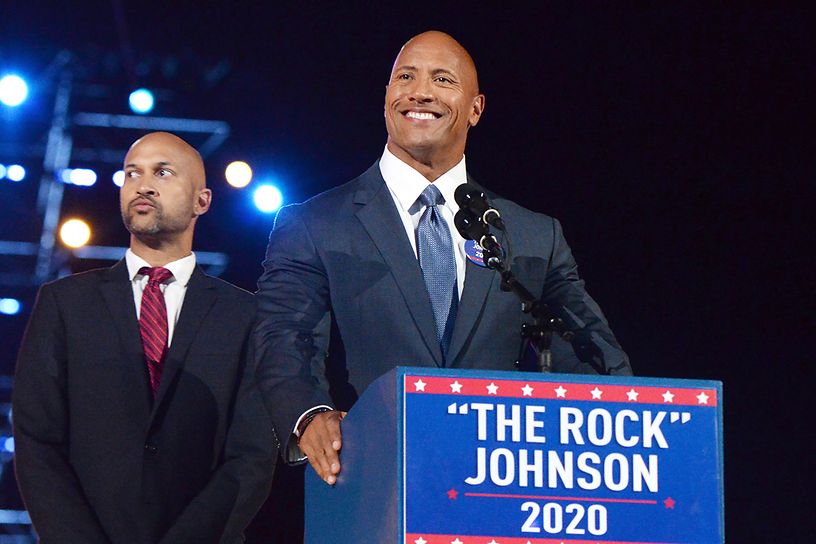 Obama’s 8 year rule has probably made Americans fall in love with the idea of having a black for a president.

Is it that they believe a black will better rule America? or is that they want to evict Donald Trump as president?

Trump’s recent firing of the FBI Director James has pushed the public to mount pressure more than ever on the famous movie star Dwayne Johnson AKA “The Rock” to stand in as a candidate for  the 2020 presidential election.

Dwayne’s popularity started when he was a wrestler where he got his name “The Rock”. He later quit wrestling for acting which he progressed so well and  was classified as the highest paid actor last year.

Dwayne captured the hearts of his fans from his time as a wrestler up until now, so much that his fans consider he will be a perfect candidate for the upcoming US presidential elections in 2020.

Conservatives’ efforts to recruit a candidate to compete against Donald Trump was able to come up only with one candidate David French, a National Review writer, who is merely contemplating the possibility of running. Fans have now provided the constitution another possible candidate.

When British GQ asked his opinion on what his fans want from him, his reply was thus

“I’ll be honest, I haven’t ruled politics out. I’m not being coy when I say that, but at the moment I am not sure. I can’t deny that the thought of being governor, the thought of being president, is alluring. And beyond that, it would be an opportunity to make a real impact on people’s lives on a global scale. But there are a lot of other things I want to do first.”

The idea of yet another star running for a higher position in the government implies that trump is at risk of losing his term next elections.

Several important personalities were asked if the possibility of Johnson becoming president was high or slim, they all replied high. One of them included Ron Meyer, the NBC Universal Vice Chairman and director of the studio that produced the “The fast & Furious Franchise”

When asked his opinion about it , he said“If becoming the president is something he (Dwayne Johnson) focused on…he probably would accomplish it. I think there’s nothing that he couldn’t do.”

He also went further to say he won’t hesitate to vote for the movie star if ever he decided to run for president.

The idea of Johnson sitting with a committee to decide on the welfare of the nation may sound ridiculous and absurd but not impossible as Obama and Trump already proved that with determination, you can succeed.

If Obama could become the first black man to rule the most powerful nation, that was because he had the credibility to. So if Johnson is qualified to be president, there is definitely nothing stopping him.