Home » President Paul Biya softens his tone on the Anglophone Crisis. This is what he said: 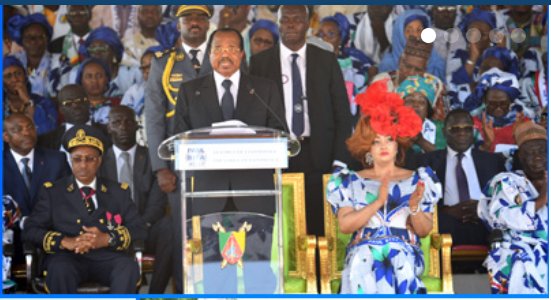 About the Anglophone Crisis, he said:

“We still need to restore peace in our North West and South West Regions by meeting the legitimate expectations of our compatriots in the two regions and by protecting them against excesses by the so-called liberators.”

Permit me, first of all, to thank you and, through you, the Far-North for the symbolic

gifts that have been presented to my wife and to me.

The Governor of the Far-North Region,

The Government Delegate to the Maroua City Council,

The Chairperson of the Far-North Regional Campaign Coordination,

Dear Compatriots of the Far-North,

Permit me, first of all, to thank the Government Delegate to the Maroua City Council

for his warm words of welcome. They are an expression of the deep ties binding me to the

population of the Far-North whose support I have always enjoyed.

Coordination for the kind words he has just spoken about me and my wife. Our relations

have always been full of frank cordiality and trust. Thank you for your warm welcome.

Thank you for turning out so massively to welcome me here in Maroua. You have

braved the sun, the heat and distance to meet me. I heartily thank you.

clear reflection of your region’s beautiful traditions of hospitality and loyalty.

that our country currently offers.

Over the past few years, you have been at the forefront. And you have stood your

Faced with a barbaric invader that destroyed, burnt and killed, you resisted as best

you could. You stood by our defence and security forces. The vigilante groups played a key

role in your resistance.

Now that the enemy has been repelled beyond our borders, we have to reconstruct,

However, we need to remain vigilant as the terrorists have not given up planning

suicide attacks that are difficult to prevent.

Now that the threat is receding, we will be facing an exalting task in no distant

future. It is a matter of winning the development struggle together, no more no less.

And you have the wherewithal.

In the area of energy, the old hydroelectric dams will be upgraded. Others will be

commissioned. Solar facilities, which are easier to build, will supplement them. Therefore,

There is every indication that your subsoil abounds in minerals and oil. It will be

necessary to give fresh impetus to prospecting and, subsequently, drilling.

such as, depending on the area, rice and cotton whose acreages need to be extended.

I should also mention your vast expanses of land suitable for livestock, milk and

Once peace is consolidated everywhere, tourism in your region will also need to be

given a second chance. Our parks and reserves have not lost an iota of their

All of this will require building infrastructure – roads, bridges, warehouses, cold

stores, etc. – which we sometimes lack.

And why not say it: is it unrealistic to think that in the very near future, a railway line

will link N’Gaoundere and N’djamena through Kousseri? I don’t think so. I will let you

Rest assured that I will not lose sight of these problems.

The coming years will be crucial for Cameroon and particularly for your region.

We have been through many ordeals to get where we are. Most of them were

imposed on us by the global environment: the 2008 crisis, the drop in oil and commodity

Others stem from our immediate surroundings, such as attacks by Boko Haram or

incursions into our eastern border by armed gangs.

Lastly, there are those resulting from the insecurity caused by a secessionist

movement in our North-West and South-West Regions.

I think I can safely state that we have overcome the toughest of these ordeals.

However, we still need to restore peace in our North-West and South-West Regions,

ravaged by acts of violence perpetrated by secessionists. By meeting the legitimate

by the so-called liberators, we will prove that their future is truly within our Republic.

us. To this end, we will need to remain united, demonstrate solidarity, juggle firmness and

dialogue, and remain faithful to our democratic ideal.

Under such circumstances, I think nothing will be able to distract our great and

beautiful Nation from its path to prosperity and social progress.

Come 7 October, I know I can count on you to make the choice that will keep you on

the side of “the force of experience”.