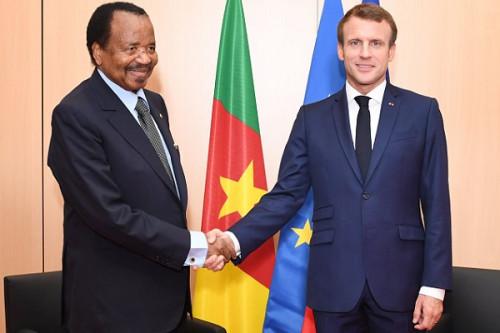 After the final day of the Sixth Replenishment Conference of the Global Fund to Fight HIV-AIDS, Tuberculosis and Malaria, in Lyon(France) President Paul Biya had a one on one meeting with French President Emmanuel Macron.

In an interview with the press, President Paul Biya said:

“I had a talk with President Macron. Of course we talked about the problems of the Global Fund to fight tuberculosis, malaria and HIV. We also talked about some issues concerning our cooperation. He asked me how the National Dialogue [on the crisis in the North-West and South-West, from September 30 to October 4, 2019, Yaoundé] took place: I gave him a report on the unfolding debate. And then we gave an overview of the cooperation between the two countries; to see that this cooperation was going well.”-President Paul Biya on his conversation with President Macron

“We are committed. We have contributed atleast 3 billion [FCFA] for the coming Program. And Cameroon is one of the countries that would receive money from the Global Fund to fight against AIDS, malaria and malaria”-said President Biya, in connection with Cameroon’s commitment to the objectives of the Global Fund.

This is why Pro-Federalism Anglophone National Dialogue Delegate; Paddy Asanga, got arrested!