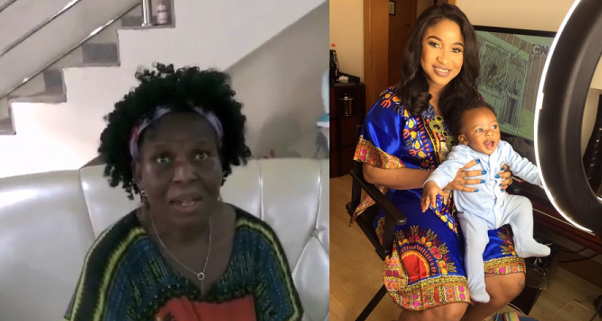 Tonto Dikeh’s son’s Nanny Mrs Mgbechi Enyinnaya of imo state openly contradicted her mistress’ words of showing her love and concern. The 56 year old woman opened up to journalists in Lagos on Sunday, May 14th, denying everything the actress had said about ever showing love and concern to her. A video had gone viral where in the actress was seen scolding at the nanny in the midst of people, not taking into consideration the woman’s age.

According to Tonto, she has been showering the woman with love and gifts for her and her children and has even taken her to more than 15 countries.

Although she acknowledged that Dikeh had on a number of occasions given her clothes for two of her children, she denied most of what Tonto said.

Read the full recount of her relationship with Tonto Dikeh below;

“Throughout the period I worked for Tonto, she always assaulted me verbally. At the slightest opportunity, she would rain abuses on me and tell that she would scatter me if I wasn’t careful.

I lived in that house with her despite all the constant harassment because of her son, King. I loved the boy like my own child and it was because of him that I stayed long with her. She has never given me money to give to my children.

The only thing she did was to give me some of the clothes she wanted to distribute to motherless babies homes to give to my children.

Tonto said that she had taken me to 15 countries, let her show the world my passport and the copy of the visas she claimed to had obtained for me.

The only place we went outside Nigeria together was Ghana and it was her husband, Churchill, that took us there. The video she posted online was not the complete version. All the things I said, they did not show it.

She only showed where she and others were intimidating me; they never allowed me to talk. Let her tell the world the truth because I worked for her diligently and had never conspired with anyone to tarnish her image.“